Ah, Melbourne. The coffee capital of Australia. Every little laneway brimming with cafes and roasteries. You take in the vibrant chatter, the hiss of the espresso machine and the specialty coffee cards on display. You’re next in line, ready to order your favourite latte or cappuccino. Then you hear an odd statement from the lady in front of you.

“May I have a magic, please?” The customer asks the barista.

You look at the menu. Nothing. You look to the barista. He gives a knowing smile and starts the grinder. Am I on the right planet? You wonder. What on earth is “magic”?

What Is Magic Coffee?

Magic is an espresso-based milk coffee that is almost exclusive to Melbourne. The moment you leave the borders of Victoria, you are likely to get a puzzled look from the barista. What is this secret drink?

“Magic is a coffee made with a double ristretto, topped with silky, steamed milk; and served in a 5 oz cup.”

Let’s break those keywords down, shall we?

A ristretto shot is simply a “smaller” espresso shot. An espresso is around 30ml, whereas a ristretto is around 20ml (so a double ristretto is 40ml). Less water is used to brew it, so the final volume that comes out is less as well.

In regular espresso, the lighter, fruiter notes are extracted first; and the darker, bitter flavours last.

For a ristretto, because the flow of water is cut off early (since less water is used), the bitter notes are not extracted. Hence, ristrettos can taste sweeter and brighter, which many people prefer.

Milk that is silky, velvety and glossy, with only a tiny amount of microfoam in it. The texture of the milk is similar to that of a flat white. Some baristas don’t steam a magic’s milk as hot as a latte, which makes it easier to quickly drink it.

A regular flat white is usually served in 6 oz cups. Magic, served in a 5 oz, has less milk than a flat white, which makes it a more concentrated coffee. Some baristas don’t even fill the cup all the way to the brim, instead they only fill it up to three quarters full, which makes it even stronger. And Melburnians love this!

If, for example, you want a quick caffeine fix, but don’t feel like having another large latte, a magic is that sweet spot. It is strong enough for the coffee craving, but doesn’t fill you up.

In short, you can describe magic as a smaller, stronger-tasting flat white.

Magic is an increasingly popular drink because it hits that milk to coffee “sweet spot” ratio. Whilst it’s starting to become a more mainstream drink, many cafes still don’t have it on their menu. It’s like a secret menu item – if you know it, you know it. Knowing about magic almost feels like being in an exclusive club of coffee lovers.

I first learnt about it from my coworker, the chef who worked at the same cafe I did. Her partner was from Melbourne, so when she asked me if I could make a magic for him, I thought she was joking. But a little research later, I was happily slinging up magic coffees for her partner whenever he came in! It quickly became a favourite of mine, alongside a Piccolo Latte (incidentally, also an Aussie creation – they sure know good coffee!).

It is starting to spread to other parts of Australia, but only a handful of baristas in Sydney or Queensland or anywhere outside of Victoria know what it is. Outside of Australia though, you’ll be out of luck.

But if your barista knows his basics (and he/she should), don’t be shy to walk up and say, “I’d like a flat white with a double ristretto, filled to three-quarters full.” Don’t forget the word “please”, and your local friendly barista can happily jump on making this secret drink a reality for you! 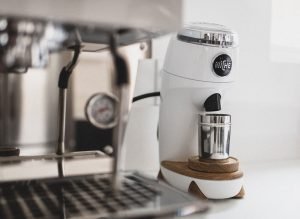 What is Single Dosing? Why You Should Stop Filling Up Your Hopper – Pronto

In single dosing, you first weigh out the coffee beans you need for the brew you’re doing. But why bother? Learn the top 3 benefits and top 2 things to watch out for. 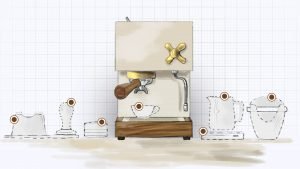 Top 7 Espresso Tools for Your Home: A Fun Illustrated Guide

Having an espresso machine and a grinder isn’t quite enough. You need several small yet essential espresso tools to ensure quality in your workflow.